The Association of Certified Fraud Examiners (“ACFE”) regularly conducts a global fraud study with insightful findings which can help organisations with their fraud risk management.

This year, the ACFE’s 2020 Report to the Nations on Occupational Fraud and Abuse provided analysis of 2,540 cases of occupational fraud that were investigated by Certified Fraud Examiners, between January 2018 and September 2019. The fraud cases in the study came from 125 countries throughout the world, providing a truly global view into occupational fraud. The study highlighted a reported loss of £2.7 billion equating to an average loss of £1.2million per case.

This report (https://www.acfe.com/report-to-the-nations/2020) was published before the pandemic and is based upon figures and evidence gathered pre COVID-19.

Among the various kinds of fraud that confront organisations, occupational fraud (a fraud committed against them by its own officers, directors or employees) is likely the largest and most prevalent threat. It constitutes an attack against the organisation from within, by the very people who were entrusted to protect its assets and resources. The primary categories of occupational fraud are:

Of the three primary categories of occupational fraud, asset misappropriation is by far the most common, occurring in 86% of the cases in the study. However, they are also the least costly, causing a median loss of £77,000. Types of misappropriation include theft, skimming, forgery, invoice fraud, payroll fraud, expense fraud and fund misuse.

Corruption schemes are the next most common form of occupational fraud; 38% of the cases in the study involved some form of corrupt act.

These schemes resulted in a median loss of £155,000 to the victim organisations. Types of corruption include conflict of interest, bribery, illegal gratuities, kickbacks and extortion.

The ‘Red Flags’ of fraud

The most common red flags in every ACFE study since 2008 have been individuals who are living beyond their means or in financial difficulty. 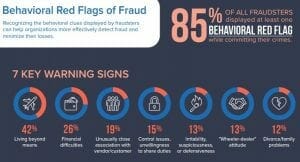 In 85% of the cases reported, fraudsters displayed at least one behavioural red flag and in 52% of cases, the fraudster exhibited red flags connected to their work duties.

Neil Miller, Founder at TenIntelligence compares the report findings with the current COVID-19 climate: “Interestingly, 80% of the reported frauds in this study, were employees who were or are, facing some form of discipline or change at work. This is vital consideration, as many employees in the UK have been furloughed, placed on reduced hours and income and therefore suffering from financial difficulty, stress and shortfall.”

So how do you spot a fraudster?

It is not easy, but alongside the red flags described, fraudsters will display three major traits which you can apply, in your investigations. This is often referred to as the fraud triangle:

Do they have the opportunity?

During these COVID-19 times, yes. Working remotely means no-one is looking and they might have access to sensitive information.

What is their motivation?

This is usually some form of financial pressure, such as a reduced income, or even revenge against the employer.

How do they rationalise their actions?

In our fraud investigation experience, we often hear fraudsters say in their defence:

The detection of corporate fraud usually arises from an internal audit finding, anonymous tip off, suspicion, complaint, whistle-blower or allegation. In our experience, suspicions of fraud are normally well founded, irrespective of the source. If you need help investigating your suspicion, or require assistance in recognising the red flags displayed by perpetrators, contact the team at info@tenintel.com.